Book Review of “First Friends: The Powerful, Unsung (And Unelected) People Who Shaped Our Presidents” 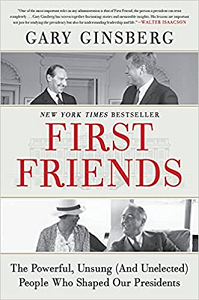 Resident Ken Weeden’s review of First Friends: The Powerful, Unsung (And Unelected) People Who Shaped Our Presidents by Gary Ginsberg [New York:Hachette, 2021], is scheduled for Tuesday, September 21, 2021 at 7 PM in the Auditorium.

If you want a friend in Washington, get a dog. Presidents are often surrounded by those who seek prestige and idol worshippers. True friends are hard to find.  In First Friends, Gary Ginsberg discusses nine presidents who had lifelong, close friends who stood by them throughout their lives.  Mostly out of public view, they listened, provided emotional support, helped them relax during times of national crises, and in some cases, became involved in presidential decision making.

Consider Abraham Lincoln and his BFF, Joshua Speed.  They met in 1837, and hit it off immediately. When Lincoln faced depression and even thoughts of suicide, Speed stayed with him, and later encouraged him to enter politics.  Speed was at Lincoln’s inaugural, provided quiet advice throughout the Civil War, and most importantly was instrumental in keeping his home state of Kentucky from seceding.

On the other hand, FDR’s first friend was a distant relative, Daisy Suckley who was there when Roosevelt contracted polio and felt his life not worth living.  She was there throughout his 12 years in office, not to provide advice, but to help him relax, to laugh with him and to forget, at least for few hours the terrible burdens on his shoulders.  She was there at Warm Springs when he died.

Eddie Jacobson and Harry Truman met in 1903, and over the next few years they became close friends.  Jacobson encouraged Truman to enter politics.  Once president, Truman often invited Jacobson to the White House and staff were told to put calls through from Eddie without delay.  In 1948, Truman’s advisors were divided over recognition of Israel, Secretary of State George Marshal was emphatically against it; the nation was divided. Eddie Jacobson met with Truman and convinced him it was the right thing to do.

Perhaps no best friend had greater political influence than David Ormsby-Gore.  He met Jack Kennedy in London in 1938.  They both loved to discuss politics, political theory, and history.   More than 20 years later, Jack Kennedy became president and he asked the British Prime Minister to appoint Ormsby-Gore as his ambassador to the United States. He often provided advice, not as the British Ambassador, but as a personal friend.  During the Cuban Missile Crisis, Kennedy trusted no one’s opinion more than Ormsby-Gore and his brother Robert Kennedy.

Author Gary Ginsberg grew up in Buffalo, New York, home of two U.S. presidents and has had a career in journalism, media and politics.

Ken Weeden is a former history teacher and frequent reviewer of books about history and social justice.

Book Review of “Galileo and the Science Deniers”

Resident Ralph Strong’s review of Galileo and The Science Deniers by Mario Livio [New York: Simon & Schuster, 2020], is scheduled for Tuesday, August 17, 2021 at 7 PM in the Auditorium.

Who was Galileo Galilei? Why is he honored as the “father of modern science and astronomy?” Why, as a devoted Christian, was he convicted of “suspicion of heresy” by the Inquisition? How were the science deniers of the 17th century like those of the 21st century?

Author Mario Livio published this well-researched book to provide sufficient detail and sources to accurately answer these questions, while providing a readable, interesting book. The book was selected as a Best Book of the Year by The Washington Post and Science News.

The author is an astrophysicist, who was the Chief Scientist at the Space Telescope Science Institute for 24 years. The organization operates the Hubble Telescope. He has published over 400 technical papers and many bestselling books that are designed to bring science and mathematical topics to non-scientists. He is a Baltimore resident, the science advisor to the Baltimore Symphony Orchestra, a well-known lecturer, and a patron of the arts.

This book is an in-depth look at the life of Galileo Galilei, his interactions and conflicts with the Roman Catholic Church, his brilliant discoveries in science, and an analysis of political and religious denial of science during the 17th century which persists today. He was a well connected devout Catholic but came under fire when his writings supported theories that the Earth orbited the sun. This conflicted with literal interpretations of the Bible and Church teaching which in part was based on Aristotle’s philosophy that the Earth must stand still as the center of the universe. This book explores the Inquisition that found Galileo guilty of “suspicion of heresy” and how it impacted the academic community.

There are many books available that deal with Galileo’s life and the Galileo affair. Many are heavily biased as apologists for either the Church or Galileo. Some show so much detail that they are difficult to read. Mario Livio’s objective in this book is to provide enough detail so the book reveals the truth without excessive material making it difficult to read. Livio also compares the science deniers of the Church 400 years ago to those of today who use the same arguments in the attempt to discredit modern science, particularly evolutionary biology, climate change, and vaccinations.

Ralph Strong, a Charlestown resident, is a retired engineer and avid reader, especially of books related to science. 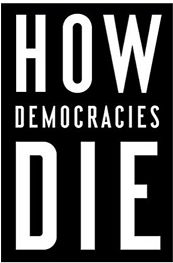 Book Review of “How Democracies Die”

Resident Howie Nixon’s review of How Democracies Die by Steven Levitsky & David Ziblatt [New York: Crown, 2018] is scheduled for Tuesday, July 20, 2021 at 7 PM in the Auditorium.

Most of us have probably taken for granted the survival of American democracy. After all, it has survived for nearly two hundred and fifty years. At least for some, however, January 6, 2021 cast some doubt on this assumption. Harvard government professors Steven Levitsky and Daniel Ziblatt addressed the question of the survival of American democracy in their book How Democracies Die. Although published in 2018, their research and analysis remain relevant. After spending over twenty years doing research in countries in Europe and Latin America that had experienced the loss of democracy, they turned their attention to the United States in 2016. Their book provides an opportunity to understand the conditions that contributed to January 6th and a basis for thinking seriously about the meaning of democracy and what it will take for America to survive as a real democracy in the future. The authors’ writing style makes the book highly accessible to a general audience.

Levitsky and Ziblatt review their past research, discuss the role of political parties and unwritten norms in sustaining the guardrails of democracy in America, identify indicators of authoritarian behavior by political leaders, and apply their conceptual framework to the United States. Research by Levitsky and Ziblatt and others has shown that democracy has been declining in a number of countries and overall in the world for the past few decades. Perhaps surprisingly, the loss of democracy in most of these countries in recent years has not resulted from violent takeovers or military coups. It is from a less dramatic but just as destructive process. It is at the hands of elected leaders and not generals. This is the case of the rise of electoral autocracies in which elected leaders systematically dismantle the architecture of democratic government and the norms making it possible. In describing this process, the authors provide important insights and warning signs to help us assess the vulnerability of our own nation to this kind of process.

American democracy will only be preserved if responsible citizens are aware of its status and what is required to preserve it. This book is an important and timely vehicle for stimulating discussion of this critical issue.

How Democracies Die was awarded the 2019 Goldsmith Book Prize for its contribution to improving democratic governance through examination of the intersection of the media, politics and public policy.

Howie Nixon, a Charlestown resident, is a retired professor of sociology at Towson University. 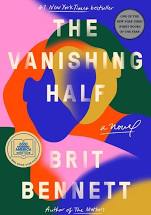 Tuesday, June 15, 2021 at 7 PM in the Auditorium
The Vanishing Half: A Novel by Brit Bennett [New York: Riverhead, 2020], reviewed by Chilton Knudsen.

Author’s website
The Vanishing Half Counts The Terrible Costs Of Bigotry And Secrecy  [NPR]
…A Twin’s Struggle to Pass for White [The Guardian]
Her Mom Inspired the Book [LA Times]
..Inspires the  Power and Performance of Race [NY Times]
No Going Back… [The Androit Journal]
Author Interview [Vox]
Interview [Politics and Prose] (video)
Author Brit Bennett Based Her Novel…. [People] (podcast w/ author)