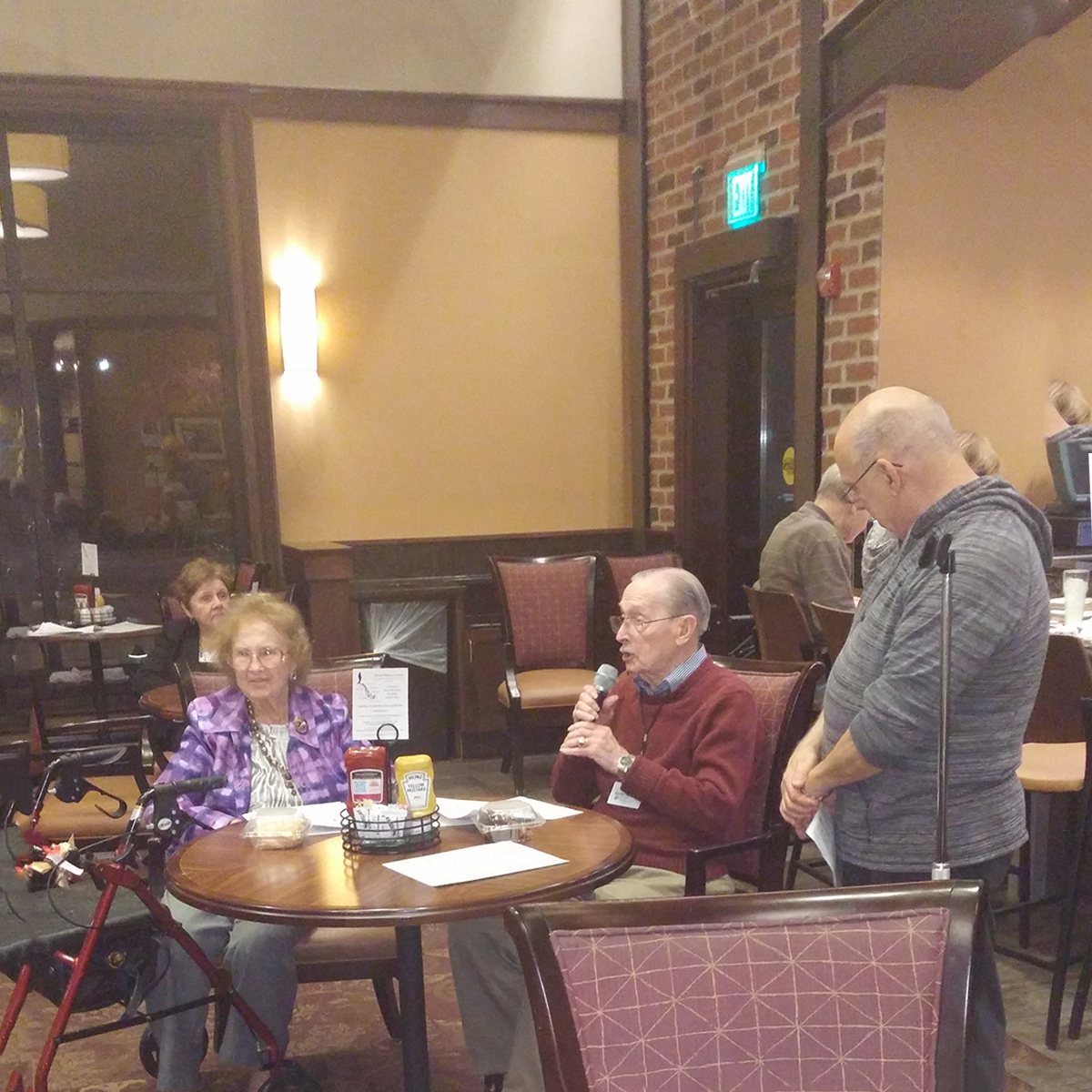 Last month at the November Open Mic Night it was brought to our attention that Stan Hindman was about to celebrate his 100th birthday on Dec. 2.  We all sang Happy Birthday and Stan said a few words.  He was dressed dapper and looked fit as a fiddle.  He was a bit hard of hearing and wore hearing aids but he was able to understand our sentiments and we learned he was married to his wife Penny for 68 years (who has been hospitalized since early December herself).  It was very moving and Eric Queen, Manager of the Terrace Grill took this picture.  Very few knew at that time that he was a WWII hero, having been awarded the Silver Star and Distinguished Flying Cross for valor as a fighter pilot.  Stan passed away one week past his 100th birthday on Dec.9.
Commander Stanley Eugene Hindman (Ret) graduated from the Naval Academy, class of 1939.  His aforementioned feats of bravery are published on the Hall of Valor in the Military Times website Hall of Valor in the Military Times.  The obituary and guest book can be accessed at John M. Taylor Funeral Home.

(Ret) USNA Class of ’39 1915-2015 An Officer and a Gentleman Stan passed away peacefully in Annapolis Maryland on December 9th, 2015, having met his personal goal of living to 100. He spent his last day on earth exactly as he would have wanted, surrounded by his loving family. Although Stan proudly served his country as a fierce warrior in the United States Navy, as evidenced by his being awarded a Silver Star for valor during WWII as well as the Distinguished Flying Cross, a more compassionate, loving and gentle man has never been born. Stan was loved by everyone he ever met, and for good reason. Stan had a lifelong love of flying, piloting a glider for the first time at the age of 84. He amazingly spent his 90th birthday at the stick in a T-6 Texan performing maneuvers such as an Immelmann and barrel rolls, reminiscent of his days as a Navy fighter pilot. Vying for his affection was the game of golf, which he met with great determination. He particularly enjoyed his rounds with his friends at the USNA Golf Club. Stan’s sense of humor was legendary, which he used to great effect, often to help others through difficult moments. His love of puns also led to some groans! Services will be held at the United States Naval Academy Chapel at a later date and will be posted on the funeral home website. In lieu of flowers, remembrances will be welcomed in the form of donations to The Wounded Warrior Project. Arrangements by John M. Taylor Funeral Home. An online guestbook is available at www.johnmtaylorfuneralhome.com
Published in The Capital Gazette on Dec. 20, 2015: View Guest Book  | See more

A memorial service will be held at St. Andrew’s Chapel, US Naval Academy, Annapolis, MD on Friday, January 22, 2016 at 10:30 a.m. Internment immediately following at the USNA Columbarium. In lieu of flowers, remembrances will be welcomed in the form of donations to The Wounded Warrior Project.