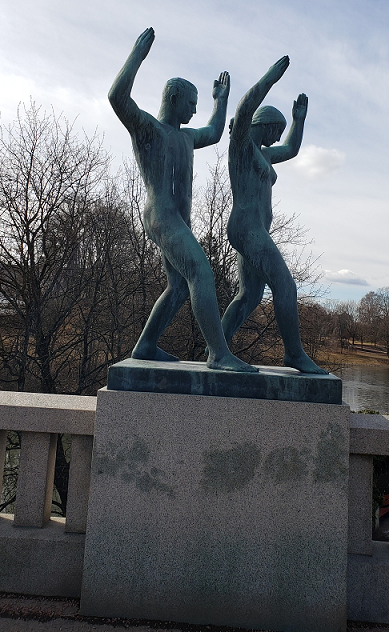 Recently, I had the great good fortune to travel in Norway and then cruise around the British Isles on a Viking ship.

I love to travel, staying attentive to everything…especially new words…loving language as I do. Occasionally I even try to use new words.

Just flying on KLM across the Atlantic at a hoogste of 30-some thousand feet is pretty exciting…even if it’s a scary long way down to the cold, dark water…you know, should something happen. Just sayin’. I mean, there’s no way out of an airplane…no ut gang, as they say, like there is if you’re in a car or bus, travelling at a relatively slow grondsnelheid of maybe 70 mph. On the other hand, in the wide open spaces of air, you don’t have to worry about gridlock and showstoppers like a doorgang gestaten that can turn a beltway into a parking lot in the blink of an oog. Like anything else, there’s always pro’s and con’s, right?

Talking about ground traffic, there’s not much of it in Oslo because everyone is encouraged to use public transportation. I like that. So, if you’re riding a bus or train, no worries about where to park your car should you see a no dutgang sign.

On our first day, we visited the Vigelandsparken a sprawling outdoor display of 212 huge sculptures of naked human figures, from infants to elderly, in all kinds of life situations. The sculptures were formed from granite, bronze and wrought iron by Gustav Vigeland and his team. Vigeland died in 1943.

BTW, there are no homeless people in Oslo. Also, this is a culture that our tour guide quite accurately described as neat, tidy, green, and pragmatic. I like that, too.

To me, Norwegians look attractive, fit, and healthy, particularly women, many of whom are tall, blonde, and have round blue eyes, full lips, and dark eyebrows. They get lots of Omega 3 in their diet (fish).

Talking about food, try as I might, I could not clearly discern a distinctive Norwegian cuisine. Correct me if I’m wrong, but it appears to be mostly meats, cheeses, potatoes, codfish, salmon, herring, and orchard fruit. AND Muesli. Muesli is a complex cold, wet, sweet cereal, not unlike oatmeal, chock full of apples, grapes, pecans, etc. I’ve developed quite a taste for Muesli.

Oslo’s new opera house is very 21st century and state of the art in its design and architecture. (Not that I went to the opera.) It has “passive heating” from the sun and actually generates more heat than it needs. Ditto the huge, incredible public library which looks nothing like a library with its ginormous art installations; its gathering/eating spaces; its 3-D printers; its soaring heights and escalators; its study tables and research cubbies. WOW!

Norway enjoys a pretty good economy with much of its revenue coming from oil. College is free, and they have single-payer (government) universal health care. Also, they take quite good care of their disabled citizens and their children with many visible accommodations for both groups. Compared with taxation in the US, Norway’s taxes are high…but then, I guess you get what you pay for.

Everywhere you look in Norway, you see rivers, white birch trees, and tall skinny pine trees. And fjords… which until this trip I did not quite understand. (I like to flummox people and say, “fuh-jords.)  Very beautiful even in chilly early April.

Last, but not least, Oslo claims the famous and important Norwegian expressionist artist Edvard Munch. According to Wikipedia, Munch’s childhood was overshadowed by illness, bereavement, and a dread of inheriting mental illness. Remember his painting The Scream? Enough said. His other uplifting titles included Jealousy, Separation, Anxiety, Vampire, and The Sick Child.