Review of The Handmaid’s Tale 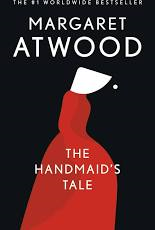 Resident Michelle Chenoweth will review The Handmaid’s Tale by Margaret Atwood on Tuesday, November 17, 2019 at 7 PM in the Auditorium.

Margaret Atwood, a Canadian writer, penned her dystopian, speculative novel, The Handmaid’s Tale, in 1985-86. In planning her novel, Atwood asked herself
• If I were going to take over the United States, how would I do it? Would I say, “I’m a socialist, and we are all going to be equal”? No, because it would not work.
• Would I say, “I’m a liberal, and we will build a society of multiple toleration”? She probably would not say that if she wanted mass support.
• A strict religious person would much more likely say, “I have the word from God, and this is the way we should run things.”
That probably would have more of a chance of working, and, in fact, there are several movements in the U.S. today saying just that and getting lots of dollars and developing influence.

Atwood limited the ideas and practices in The … Tale to those that have occurred somewhere in the world since the beginning of recorded time.

Set in the near future, The Handmaid’s Tale describes life in what was once the United States and is now called the Republic of Gilead. Gilead is a monotheocracy that has reacted to social unrest and a sharply declining birthrate by reverting to, and going beyond, the repressive intolerance of the original Puritans.

The Gilead regime literally interprets the Book of Genesis, with bizarre consequences for its women and men through constant surveillance, strict regulation, and extreme punishment.

Desperate to deal with a shrinking birth rate caused by pollution, chemical poisoning, and decreasing fertility, the government of Gilead creates the Handmaids, women with viable ovaries who are placed in the households of ranking government officials whose wives cannot bear children. The handmaids are fertile women who are forced to have intercourse with the leaders to produce babies for these elite, barren couples.

This tale relates the day-to-day life of one handmaid—Offred (of Fred). The handmaids lose their identities in the service of Gilead and are named after their masters. If after two years the handmaid does not conceive, she is transferred to another master and takes his name Ofwarren (of Warren).

The Handmaid’s Tale is a scathing examination of gender relations, ecological damage, the dangers of mixing religion and government, and the importance of free speech for retaining a sense of self.