Review of “Separate: The Story of Plessy v. Ferguson and America’s Journey from Slavery to Segregation” 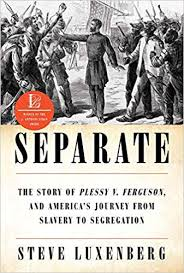 Resident Ken Weeden will review Separate: The Story of Plessy v. Ferguson and America’s Journey from Slavery to Segregation by Steve Luxenberg, on Tuesday, July 16, 2019 at 7 PM in the Auditorium.

When Homer Plessy walked to the train station to buy a ticket for a short ride on the East Louisiana Railroad one sunny June day in 1892, he was determined to break the law. It was all planned:  He would purchase a first-class ticket, then board the train, sit down in a comfortable chair. He would be recognized and told to leave the car; he would refuse; he would be arrested and taken to jail, booked, post bail and be home in a couple of hours.

And his crime? Homer Plessy entered the “Whites Only” first class car.  He was a Creole, 1/8 African descendent.  His family’s ancestor had come from Haiti in the 18th century and settled into the Spanish, French culture of New Orleans.  He passed for white on a regular basis, and he was seldom bothered by the increasing restrictions and violence former slaves faced. But by state law, he was Black and must travel in the Jim Crow car.  Because he looked white, civil rights lawyers wanted him to be the test case that challenged the constitutionality of this law that they felt flew in the face of the 14th Amendment.

Four years later, on May 3, 1896, the Supreme Court heard oral arguments and later rendered its decision.  In a 7-1 vote, the Court ruled that the separate but equal doctrine did not violate the Constitution.  Further, Justice Brown argued that if negroes felt humiliated and degraded, that was their personal issue, there was nothing humiliating or degrading in the races being separate.  The lone dissent was penned by Mr. Justice John Marshal Harlan who argued that the Constitution is color blind and any distinction based on race was illegal.  He feared that this decision would open the floodgates to greater separation of the races and greater violence. The few newspapers that picked up the story agreed that the races should be separate, it had always been; it was natural.

Separate by Steve Luxenberg is more than a detailed study of the infamous decision. It traces race relations from the optimistic days of Reconstruction:  Black Americans building businesses, entering politics, voting, building schools and seeing a bright future for themselves and their children.  Plessy v. Ferguson made constitutional the way White America wanted to relate to Black America: separate, unequal and as invisible as possible.