Operation and maintenance of HO and N scale model railroad for the enjoyment of residents and visitors. On-going updating improvement of layout and gardens. 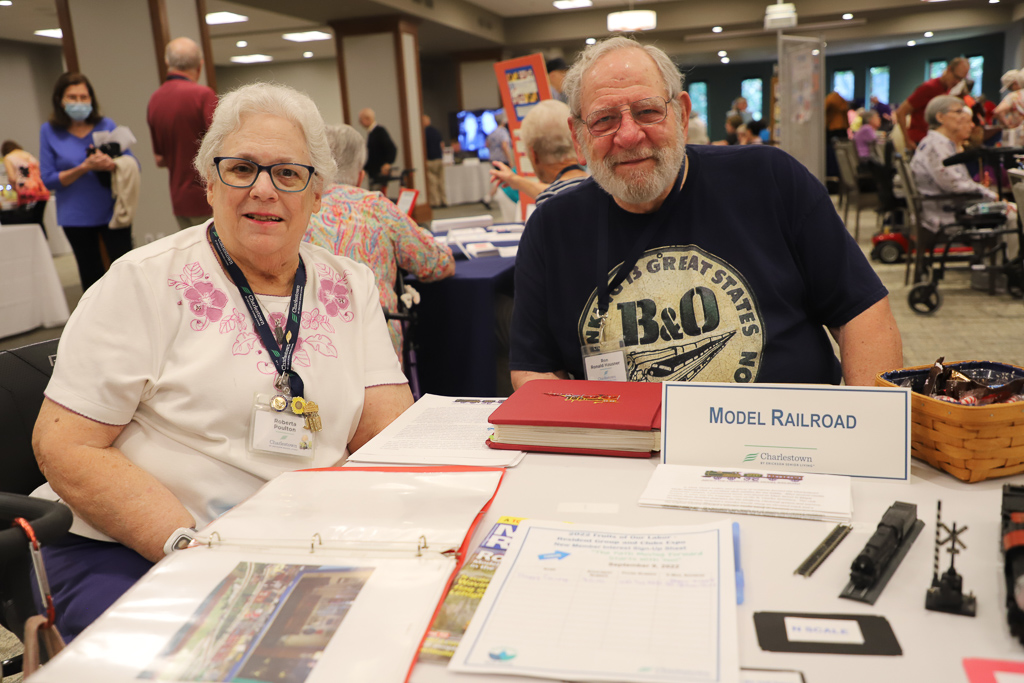 Model Railroad Table at the September 2022 Fruits of Our Labor.

About the Charlestown Model Railroad

In 1993, Chuck Anders and a group of residents formed the Charlestown Model Railroad Club to continue their passion for the hobby. After several moves around the campus, a permanent home  was  found on Main Street in Maple Terrace, in what was the baggage room of the St. Charles Seminary. The club archives show detailed diagrams for the platform, electrical  system  and scenery. The original scenery included a wooden trestle along an elevated track and a mountain cable car. The mountain  was made out of  plaster and created  problems as the layout aged. The members spent many hours building the  layout  and donating parts of their own collections  and buildings, as well as financial resources. The original layout was 4 feet high and had an elaborate toggle switch electrical panel for the HO {1:87} scale trains. There was only a small access area for visitors, right inside the door.

In 2014, the layout was totally rebuilt to make it more accessible to children and visitors in wheelchairs, as this was not possible with the old arrangement. The platform was lowered to 36 inches and is completely accessible in its entirety. The window to the hallway was made larger and lowered to view more of the layout. The electrical system was changed from DC to DCC (Digital Command Control), making it easier to have better control of the trains. DCC also gives the engineer control over the trains, lights, sounds  and  speed. A TV monitor  was added to the wall in the hallway to show train videos and provide a camera’s eye viewing of the track. Also at this time, a portable “N” (1:168) scale layout was found in a storage closet and was refurbished and added to the room.

In the fall of 2016, Charlestown renovated the Main Street corridor outside the train room. At that time members of the  club  were asked  for their input into how they would like the area treated. When  all  was said  and  done, the area looked like a train station waiting area with benches, railroad signs, a display case and an inlay in the floor. The display case has changing  exhibits, quarterly, related to railroading.

Most of the buildings, trains and scenery over the years, have been donated by residents and individuals. The era of the layout is the 1950’s when steam trains were being phased out and diesel  became the new  workhorse. The club  has  2 steam engines and 6 diesel engines in DCC, which are more expensive.  There are about 10 analog (DC) engines and a rolling stock of  200 cars. Each member of the club has different areas of expertise and interests, and they are utilized to the best of their abilities – scenery, electrical,etc.

The scenery on the long wall of the room is from Western Pennsylvania near Horseshoe Curve. There are two lighted signs, one Esso and one Bethlehem Steel on the layout, as well as lighting in some of the buildings. There is a sound controller which has 16 different sounds – cow, chicken, rooster, siren, etc. There are also railroad crossing signals, a traffic light and a track signal on the layout. Our most recent addition was a police car with flashing lights. For children, we have 3 different treasure hunts, and they are rewarded with a prize if the list is completed.

The Chuck Anders Train Room is open every Saturday from 12 noon until 2 PM and by special  arrangement. During the holiday season, the train room is open more often and the “N” scale layout may be  found in one of the dining rooms. The train videos are shown Monday-Saturday, from 3:00 PM until 7:00 PM. Maps are available at the Gatehouse for visitors to locate the display, as we are featured on YouTube.