Book Review of “Gods and Generals: A Novel” 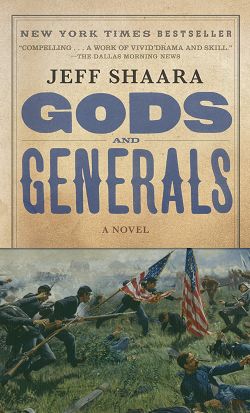 Resident Mark Buehlman will review Gods and Generals: A Novel by Jeff Shaara on Tuesday, July 19, 2022 at 7 PM in the Auditorium.

Gods and Generals, the historical fiction novel, begins in the days prior to the start of the Civil War and concludes three years later, before the Battle of Gettysburg. This New York Times bestselling book is the prequel to the Pulitzer Prize–winning classic The Killer Angels written by his father, Michael Shaara.

The four main characters are Thomas “Stonewall” Jackson, a by-the-book military instructor and devout Christian; Winfield Scott Hancock, an unknown captain who quickly establishes himself as one of the finest leaders of the Union army; Joshua Chamberlain, an academic

who becomes one of the most heroic soldiers in American history; and Robert E. Lee, always believing a civil war would never truly come to pass.

The author interweaves several themes throughout the book. All four characters struggle with family relations and the directions of their personal lives and professional careers. Religion and the “divine will of God” are also a focus. There is a stark contrast made between officers that were leaders of troops versus true warriors. Key issues such as the causes of the Civil War, the role of slavery and the Confederate “Lost Cause” are also part of the characters’ dialog.

If you enjoy Civil War history or the complexity of human nature you will find this book to be an enjoyable read.

Resident Mark Buehlman is an author, speaker, inventor and teacher, with years of diverse environmental experience and a wide range of interests.  He has taught in many educational settings, including ELLIC classes at Charlestown.