Travelog 2: The Train to Bergen (with a lesson on conversions) 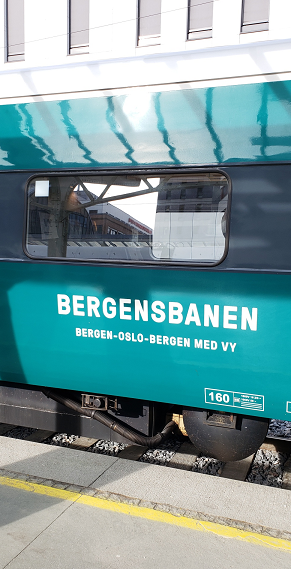 From Oslo, we rode a train for 6½ hours across the Hardangervidda (easy for you to say) Mountain Plateau (highest point = 3,600 feet) to Bergen on the west coast of Norway. All the way, I couldn’t stop humming the Beatles’ “Norwegian Wood” even though John Lennon’s lyrics have absolutely nothing to do with the view from my train window.

At this point, our third day in Norway, we were vitally and constantly interested in the weather…in degrees Fahrenheit, please…so that we would know how many layers of clothing to wear. So, I derived this formula which I will now boast about. Centigrade has a range of 100 degrees, right? From 0 (freezing) to 100 (boiling). Fahrenheit has a range of 180 degrees, right? From 32 (freezing) to 212 (boiling). So if you calculate a fraction (or percentage) by dividing the current centigrade temperature by 100, then multiply 180 degrees by that percentage, then add 32, you get the Fahrenheit. I know, I know…I could have simply Googled it, but this was fun to do during the long train ride, and I proved to myself that I can still think logically if I have to.

Let me further bore you with an actual example of the Centigrade to Fahrenheit conversion. Say the temperature outside is 5 degrees C. Divide 5 by 100 and you get .05. Multiply 180 by .05 and you get 9. Add 32 to 9 and you get 41 degrees F, and now you know what to wear.

Ditto with money. In early April, one dollar US was equal to 8.5 NOK (Norwegian Krone). So if something cost 250 NOK, just divide by 8.5 and you get about 30 bucks US, which was more money than I spent on even my most expensive souvenir.

Back to Bergen. Bergen is very different from Oslo. Bergen is old, colorful, picturesque, historic, medieval, renaissance – a bustling industry/trading port city. It used to be Norway’s capital. It has the dubious distinction of burning down and being rebuilt about 35 times. Yes, 35. Also, Bergen claims the composer Edvard Grieg and the playwright Henrik Ibsen.